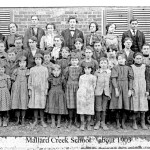 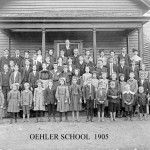 Before it was a “Community House,” it was a school

Have you ever wondered why the large white building where the barbecue is held is called The Community House? What exactly is a community house, and what is the history of that building?

To understand the importance of The Community House is to know the history of the Mallard Creek community. Mallard Creek Presbyterian Church was founded in 1824. That was only 37 years before the start of the Civil War. The local children were schooled in several small one room buildings; the Mallard Creek School, Oehler School and Union School (located near where Concord Mills Mall is today.)

Mecklenburg County experienced an economic boom in the years following the end of the Civil War that would last in large part until the Great Depression. Cotton was King. The majority of the families in the Mallard Creek community were cotton farmers. This area became an important part of the textile manufacturing industry and cotton crops equaled prosperity. These people understood the importance of a good education and in August of 1920 the Mecklenburg County Board of Education accepted a donation of land for a new school by the Crenshaw and Cochrane families. The State Department of Education provided $1500.00 towards construction cost and the old Mallard Creek and Oehler Schools were sold for the additional funds needed. As was the long standing tradition of rural communities, the new building was constructed entirely through the volunteer efforts of MCPC. Men from nine families were able to build this new school in time for classes to start that fall.

The Mallard Creek School became a focal point of activity from its opening. Community and church social events, such as church picnics and baseball games were often held on the school grounds. Community plays, recitals, and other programs were held inside the large building. The Mallard Creek School held classes for children through the tenth grade for eleven years. In 1931 the School Board opened two new and larger schools in nearby Derita and Newell. It was only logical that the Mallard Creek Presbyterian congregation, whose families had built the building and supported the school during its eleven years of service, was interested in purchasing the structure.  The price was  $250.00 when it was offered for sale by the State.

It was renamed The Mallard Creek Community House. Since 1932 it has been the home of the annual barbecue. Through the years it has served as a meeting place for the youth groups of the church, the 4-H club, the Boy Scouts and Girl Scouts. The annual Halloween Carnival was held there until the church built the Activities Building in the 1970’s. The YMCA used the grounds for programs for several years in the mid 1990’s. Since The Optimist Club built new fields, baseball and soccer games are played there again.

From its construction in 1920 to the present day, the Mallard Creek School has remained an integral part of the Mallard Creek community. It is a tangible reminder of life in rural America, as it provides a common place where the community can come together for many different activities. It is the Mallard Creek “Community House”.