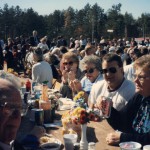 The granddaddy of barbecues

Once the day of the annual barbecue was set for the 4th Thursday in October, it did not take the politicians long to figure out it was one of the last informal gatherings of the masses prior to Election Day in November. They soon began showing up with their pamphlets and handshakes in hopes of securing a vote. Both Republicans and Democrats work hard but it is doubtful if either party makes much headway. Hands are barely released by one politician before being grabbed by a representative of the other party!

Over the years the barbecue workers have learned that the politicians bring the good with the not-so-good. The good means that in years of national elections, a larger crowd can be expected to attend. The barbecue has seen everyone from a Vice-President nominee to the local dog catcher, with every office in between. The not-so-good includes roadside political signs and loose pamphlets on tables and cars. Finally, it was decided that if you can’t beat them, might as well include them. A make-shift political gauntlet has been set aside for the politicians to meet and greet voters. However not everyone who comes to the barbecue wants to bother with meeting the candidates for mayor or governor. They are only there for the food, fresh air and seeing old friends. A ticket line to bypass them is just as busy, along with a trash can for the political junk!

Forty years had seen a whole generation born into the barbecue. The original workers were turning some of their duties over to the “young folks”. These young people had grown up learning the art of cooking barbecue and stew by watching their parents and elders. As soon as they were tall and strong enough, they were cutting wood, stoking the fires, carrying buckets, picking up trash and anything else they were asked to do. The teachers at Newell and Derita knew there was no serious work to be expected from the Mallard Creek kids on Barbecue Day. They could not wait for school to be over so they could hurry to the barbecue. And forget about giving any homework!

As we approach the 80th year in 2009, another generation or two has grown up with the barbecue being an important event in their lives. The older folks are slowing down as their children, grandchildren and even great-grandchildren are carrying on the jobs it takes to get things done to undertake such a large endeavor as the annual barbecue.

The youth of Mallard Creek have been very active in helping with the preparations. They have washed buckets, set out chairs and tables, and then put them away afterwards. They carry supplies from one location to another. They check to see if school will be out the week of the barbecue because they know there is no skipping class like their parents once did!

Remember, you do not have to be connected to any long-time family of Mallard Creek Presbyterian Church to become a part of the barbecue tradition. All it requires is for you to come, join the fellowship, and bring your children with you. It is an experience that will last a lifetime. Just ask anyone who was there last year!