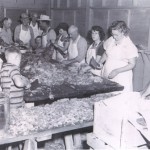 Chopping barbecue in the 1950s 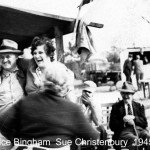 Volunteers enjoy the feeling of kinship created by the barbecue

By the end of the 1940s, the Mallard Creek Barbecue was celebrating its 20th year anniversary. The local community had embraced the annual fall event with great support. The date of the barbecue was established to be the fourth Thursday of October in an effort to avoid a conflict with Halloween celebrations. It was also known to be the maid’s “day-off” for the Charlotte movers and shakers. It provided an opportunity for them to visit the country and have a great meal at the same time.

Church families continued to raise and donate hogs for the barbecue during the 1940s. Each year piglets were purchased and placed with a family to be fattened up for the big day. The barbecue committee used proceeds from the previous year to provide the pigs, along with corn for feed and to have the hogs vaccinated. On the day before the barbecue, the men went around to the various farms to collect the hogs. They were taken to the home of Mr. H.Y. Galloway to be killed and dressed out. The hogs were then taken to the community house to be cooked through the night. Several long ditches were dug in the ground that stretched from the ticket stand almost down to the woods. The racks were placed on the dirt banks and hickory coals were shoved underneath to slow cook the whole hogs. The aroma was so strong that people from miles around came to watch and take in that special smell only barbecue has! That smell has had the same effect on people ever since as they often stop by to see what is going on at the community house on the cook days!

Starting in 1946, the hogs were taken to the abattoir in Charlotte to be prepared for cooking. The long ditches were no longer used as a new block building was built to cook the meat in. Once the meat was done, the pits were closed over and serving lines were set up inside the building. The meat was chopped in a shed and served directly to the plates and sandwiches. A time came when it was necessary to cook the meat inside a screened building. The cooking was moved to the home of J.W. “June” Oehler, Jr. The meat was cooked the day or so before and stored in coolers and transported to the community house on the day of the barbecue. When the long screened-in building was built, the cooking was moved back to the community house. The tradition of families providing the hogs also come to a close and the meat was purchased from suppliers, first as whole hogs and now butts, hams and shoulders. Because of the growth of the annual barbecue, the meat is cooked the Thursday and Friday before the big day. The use of metal cookers has replaced the dirt pits. Some of the meat is still cooked on the open pits inside the screened-in building. One thing is certain though, the barbecue is the same because it is cooked with a tradition of knowledge and fellowship as from the beginning.

Mr. J.W. Oehler, Sr. was the barbecue master/committee head from 1929 until his death in 1943. Mr. J.A. Kirk took over as the head of the barbecue committee and served from 1944 through 1965. After years serving as the barbecue master, Mr. J.W. “June” Oehler, Jr. became the chairman of the barbecue committee in 1966 and continued until 1978. In the 50th year 1979, his sons, Donnie Oehler was appointed Chairman with Craven Oehler as Co-chairman. These two men, who had grown up with barbecue in their veins, guided the annual barbecue for the next 29 years. In 2008, Charles Kimrey and Bill Wood took over as Co-chairmen. They are supported by experienced members who have been working many years and will be sure to advise them on how it is done! We look forward to the new leadership for at least 20 years!