When I began the project of putting together a pictorial essay on the annual Bar-B-Que, I came to realize that no matter the year or the group of people working, it has always been the same. In this modern world of constant change, it gave me a sense of respect and appreciation in knowing there are some things that never change. It is like God’s love, ever constant, ever sure.

It didn’t matter if it was 1929 or 2004, the hickory coals come from fires started early in the morning. The meat is still hand turned and the hams and shoulders are checked with a stick, knocking off the ash dust, loosening up the skin as it burns to a brown crisp. The meat is chopped, cooled and seasoned. I still think that is the best time to eat bar-b-que. In the olden days, that was the way it was served to the crowds – from fire to chopping table to plate. We have come a long way from 4 pigs and a goat! It now takes 2 days to cook and prepare all the meat.

When I compare the earliest pictures from the 1930s and 1940s, to the 1950s, 1970s and 2004, I see the same familiar family faces: Father to Son, Son to his Son/Daughter, to Grandchild and Great-grandchild. Talk about family traditions! Even if you are not connected in some way to the first families of the bar-b-que, you can start your own family tradition with your children in 2004.

I never realized exactly how much slaw there is in 2 tons until I started helping to mix. There is something awesome about seeing 75 bags of cabbage at 50 pounds each and knowing you have touched every single head of it. The mixing of slaw is sort of like playing in the sand at the beach. Pile it up, smooth it out, mix in onions, celery and carrots, pile it up again, and then add vinegar, sugar, salt and pepper, mix it all up again. My mother, Sug Christenbury, told me that when she started helping at the bar-b-que, she worked with Mr. Brice Bingham mixing the slaw. Now she is working alongside of his grandchildren and great-grandchildren, mixing slaw.

I have not had the experience of helping to prepare for the Brunswick Stew, so I can’t tell about it first hand. I do think it is most likely the hardest job at the bar-b-que. There are so many steps and ingredients. What a disaster it would be if something were left out. I can tell from the pictures that there is a “whole lot of stirring going on”! Some people may not be aware of the fact that the ladies who spend all day on Thursday stirring those big pots of stew also have long ties to the bar-b-que. These spots are also handed down from mother to daughter, aunt to niece.

Wednesday night is almost like Christmas Eve. Everyone is bustling about, getting the serving lines ready, putting out the tables and chairs, and getting the sandwich stand stocked with cold drinks. There are only a few things that are not done the old way and one of those is “wrapping silverware.” As a young person, I always thought this was a special time for fellowship. It was also a time for anyone who might not be able to work all day on Thursday to feel that they did their part. All those women, (and a few men), all together doing the same thing; talking, talking, and talking. Those little rubber bands were not the easiest things to work with either. We still have the flowers. That has always been one of my favorite things about the “getting ready” part. All those beautiful flowers, the scents, and sneezes too. Even if you think your arrangement looks awful, who can tell when they are all put together and then placed on the tables?

As Wednesday afternoon turns to dusk, the tables and chairs are spaced at just the correct measurement, sawdust is spread out and the “Pig” is put in it’s place of honor above the sandwich stand. Everyone is waiting with anticipation for Thursday morning. Is it going to rain? Will there be a frost? We all pray for a beautiful, sunny day, cool and crisp with enough nip in the air to make this favorite dish taste just right!.

Thursday. All the preparations are winding down; all the hard work becomes a great celebration. Even if you get there at 8 AM and think you are early, there are people who have already been at it for hours. Everyone stakes out their place for the day. Then before the crowds begin to arrive, we all meet for a time of prayer and thankfulness for another year gone by. We remember the ones who are not here this year. We look at the new babies and hope they will grow up to love the bar-b-que as much as we do and carry on the tradition.

The crowds descend and all time is forgotten. Before you can blink, it is 1:30 PM and you realize you have not even taken a break. You need a sandwich, a drink and an ice cream. I think working in the sandwich stand is the best place to be. You get to meet many people, some you know and many that you don’t. You get to watch the bar-b-que unfold right in front of you. I know the drive-thru is a big money maker, but I always feel those people sitting out there in their cars are missing the heartbeat of the bar-b-que.

The bar-b-que is much more than just a meal. It is a “happening”, almost like a festival. Just like in the beginning, it brings together all types of people; young and old, city and country, neighbors and newcomers. You can get drive-thru at McDonald’s but you can’t get a sense of “community,” which is what the bar-b-que is really about. I have read all the newspaper clippings and there is one re-occurring theme that appears time after time. Mallard Creek Bar-B-Que is our church’s offering to the community, our members, neighbors, old friends and new friends. It is a place where 10,000 people come together to eat, talk politics and enjoy an outing in the friendly atmosphere of country living. The Mallard Creek formula is simple. Good food, good company, good atmosphere.

As the evening shadows fall, the crowd starts to thin out and the people who have been going non stop all day seem to get a second wind and work just as hard to get everything cleaned up and put away until next year before they go home. Everyone is tired, but all know if the Lord is willing and the creek don’t rise, we will all be back next year. 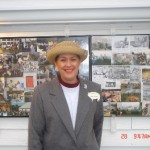 Ann Carroll and the BBQ Collage