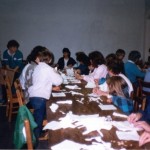 The annual barbecue had been around for 30 years as the 1950s came to an end. There had been two major wars; WWII and the Korean War. The United States was changing from a mostly agrarian culture to an industrial based society. Young men and women were leaving the family farm for work in the city. Mallard Creek was no exception as the number of full time farmers dwindled to just a few as they mostly raised cash crops like cotton, corn, and cows. Gone were the days of providing all the essentials of supporting family life from the fields and gardens.

The barbecue had become an annual ritual of harvest time. It was known far and wide for the excellent barbecue, but with the addition of the Brunswick stew, it became an equal draw for the customers. It is not noted when the first year the Brunswick stew was added to the menu, but it soon became a favorite side dish. As with the hogs, in the beginning the chickens, tomatoes and butter were donated by the church families. The Brunswick stew started cooking in the early morning hours of Barbecue Day. The line of pots went from the back of the chopping shed towards the road. The women prepared the ingredients as the men built the wood fires beneath the cast iron pots. It was reported that the smoke was so great you could hardly see the men as they stirred the stew. The pots were also donated for use on Barbecue Day by various members. In the book of newspaper clippings there is an article relating the story of one such pot. It was given to Mallard Creek by Mr. Osmond Barringer of Poplar Tent. It was over 100 years old and had belonged to his uncle, General Paul Barringer (USC). The pot was nearly four feet in diameter, had a 60 gallon capacity, and weighed at least 200 pounds. One year on the night before the barbecue, all of the pots and gas lines were stolen. When the theft was discovered, it was a miracle that enough pots were located and installed in time to get the stew going. That is the reason why a guard is on duty at the community house during barbecue week.

The stew began as more of a thick soup with lima beans and potatoes added to the chicken and tomatoes. Jennie Foster and Mary Oehler oversaw the preparations and cooking for the first 20 years or so. In the late forties, Beck McLaughlin took over and history was made! Beck had attended the very first barbecue in 1929 with her fiance, Smiley McLaughlin and quickly found her spot in the stew department. She became stew chairperson and perfected the recipe into the one that is used today. The beans and potatoes were deleted as rice, chicken, beef, pork, tomatoes, and butter became the main ingredients. Someone once asked how she knew when the stew was done and the reply was “when it is seasoned till it tastes right, and cooked till it looks right.” There are probably a few secret ingredients but rest assured, squirrel is not one of them!

Over the years the Brunswick stew recipe has been tweaked a bit but the way it is cooked has changed little. The men were the first stirrers of pots over the open ditches. Then several brick fire ovens were built using gas for the heat source. After construction of a new “stew house” the cooking was moved inside. It requires constant stirring to keep the stew from sticking to the iron pots so it was decided to hire help to free up the men to do other jobs on Barbecue Day. The ladies from the surrounding area were asked if they would be willing to do this work for pay. They agreed and, like many other positions around the barbecue, their paddles have been passed down thru the generations.

It was not long before the patrons of the barbecue wanted to “take some home” with them. Brunswick stew was a great meal to eat on a cold winter night. It is one church family’s tradition to have Brunswick stew for their Thanksgiving Dinner meal. The demand for the stew soon made it impossible to cook it all on the day of the barbecue. Beck McLaughlin’s nephew Richard Wallace, along with his wife Linda, took over as co-chairmen of the stew department. They start the process early in the week by doing several “batches” to have on hand for the take home requests. There are many church members who help with making the stew, from washing buckets, cutting up chickens, setting up the gas lines to stirring the big pots. It is hard work but the reward is a cup of stew on Barbecue Day which makes it all worthwhile.